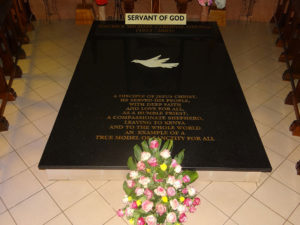 Whoever visits the Resurrection Garden should always remember that the original idea of a place for prayer dedicated to the suffering and the resurrection of Christ was willed by the Servant of God Maurice Michael Cardinal Otunga, and that he was assisted in realizing it by Fr. Ottavio Santoro, a Consolata missionary.

After the death of Cardinal Otunga in 2003, he was buried in the Msongari Cemetery where the other priests and missionaries of the Archdiocese of Nairobi are buried. Two years after his death, Fr. Santoro asked his successor Archbishop Raphael Ndingi the permission to build in the Resurrection Garden a memorial Chapel for Cardinal Otunga and where they would transfer the remains of the Cardinal. Archbishop Ndingi told Fr. Santoro to wait until he would consult the senate of the Archdiocese. In fact, after a short time, he was given the permission to go ahead with the project.

Fr. Santoro constructed this chapel under the Raw Construction in 2005, and in the same year, the mortal remains of Cardinal Otunga were exhumed and reburied in the same year in a grave made inside the same Chapel. 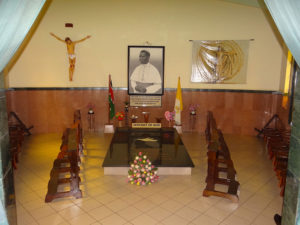 In this chapel is especially celebrated a mass every Wednesday at 5 where all the intentions of the pilgrims are offered and the souls of the Servant of God together with Fr. Santoro are prayed for.