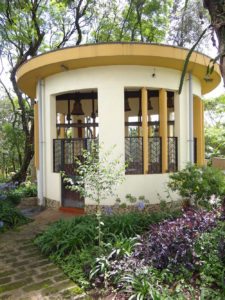 The Bell House Chapel or Belfry is a small chapel with a capacity of about 40 people just next to the Rector’s Office. The Church’s bell has always been considered as the voice of God calling the faithful to prayer and the voice of the people giving praise to God: “praise the Lord, all you people” – (Laudate Dominum omnes gentes) is our prayer of praise to God for all the wonders He has worked for us.

There are five electronic bells made by the Cobalchini of Padua, Italy. The electronic system of the bell was manufactured by FAGAN Company.