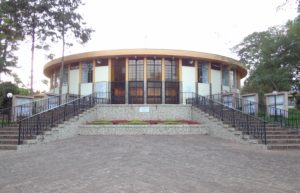 The Main Church was part of the main construction by the Arcadia Constructors in early 1990s. It is a magnificent all round Church as was wished by the Servant of God Maurice Michael Cardinal Otunga to remember the African hut. It has a capacity of about 1000 people.

On the roof, inside the church, at the central point is a huge golden dove symbolizing the Holy Spirit who seems to send His different rays (gifts) to the Church (people of God) as symbolized by the supporting pillars that that run from the central point to bottom.

The front part behind the altar is the image of the Resurrected Jesus, a symbol that gives identity to the shrine. On both sides of the risen Christ are stained glasses representing events of the Acts of the Apostles and the various phases of the evangelization in Kenya. These stained windows were designed and manufactured by Albano Poli of Verona, Italy.

Looking at the altar, on its left, the following events were represented: 1) The healing of the crippled by St. Peter; 2) the martyrdom of Stephen, the first martyr; 3) the conversion of St. Paul; 4) the baptism of the first African by St. Philip (this was to remind people that Christianity in Africa put its roots right from the beginning and therefore it cannot be considered a foreign religion). 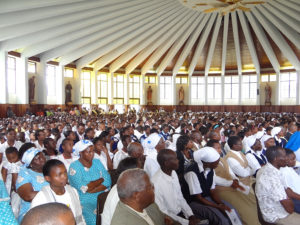 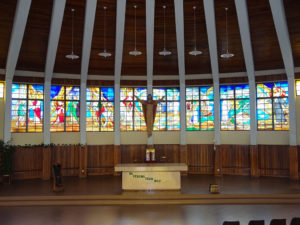 On the left the following events of the evangelization in Kenya are represented: 1) the first contact of the Catholic faith by St. Francis Xavier in Malindi (1541-1542); 2) the first attempt of evangelization in Mombasa in the 17th century, when some died as martyrs to defend their faith (1631); 3) the modern evangelization that started around the end of the 19th century (1860); 4) the fully established Church, with African Bishops as the Shepherds of the local Christians (1990).

After the Ascension of Jesus, the apostles and their successors, assisted by the Holy Spirit, spread the Gospel all over the world, including Kenya, overcoming countless difficulties. Some followers of Jesus, because of their extraordinary witnessing to the Gospel, and because of the holiness of their life, are presented as teachers and protectors. Their wooden statues are in the Main Church of the Resurrection Garden and were realized by the Ortisei of Demetz Studio, Italy. 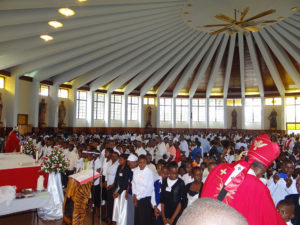