The Resurrection Garden > The Last Judgment 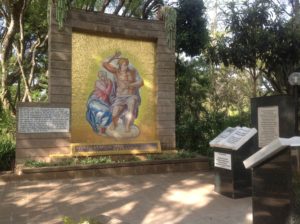 Near the Belfry, there is a stand with a mosaic realized by Mr. and Mrs. William Bertoja of the Friul Mosaics of Pordenone which is a Particular of the Michelangelo’s Second Coming of Christ found in the Sistine Chapel in the Vatican. The stand for the Mosaic was realized by the Raw Construction in 2003.

Next to that image of Michelangelo, a Memorial Stone for Cardinal Otunga was added in 2003 after his death and that of Fr. Ottavio Santoro was added and inaugurated by the Apostolic Nuncio to Kenya and S. Sudan Archbishop Charles Daniel Balvo on 18th November 2016, one year after his death. 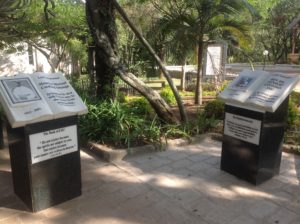